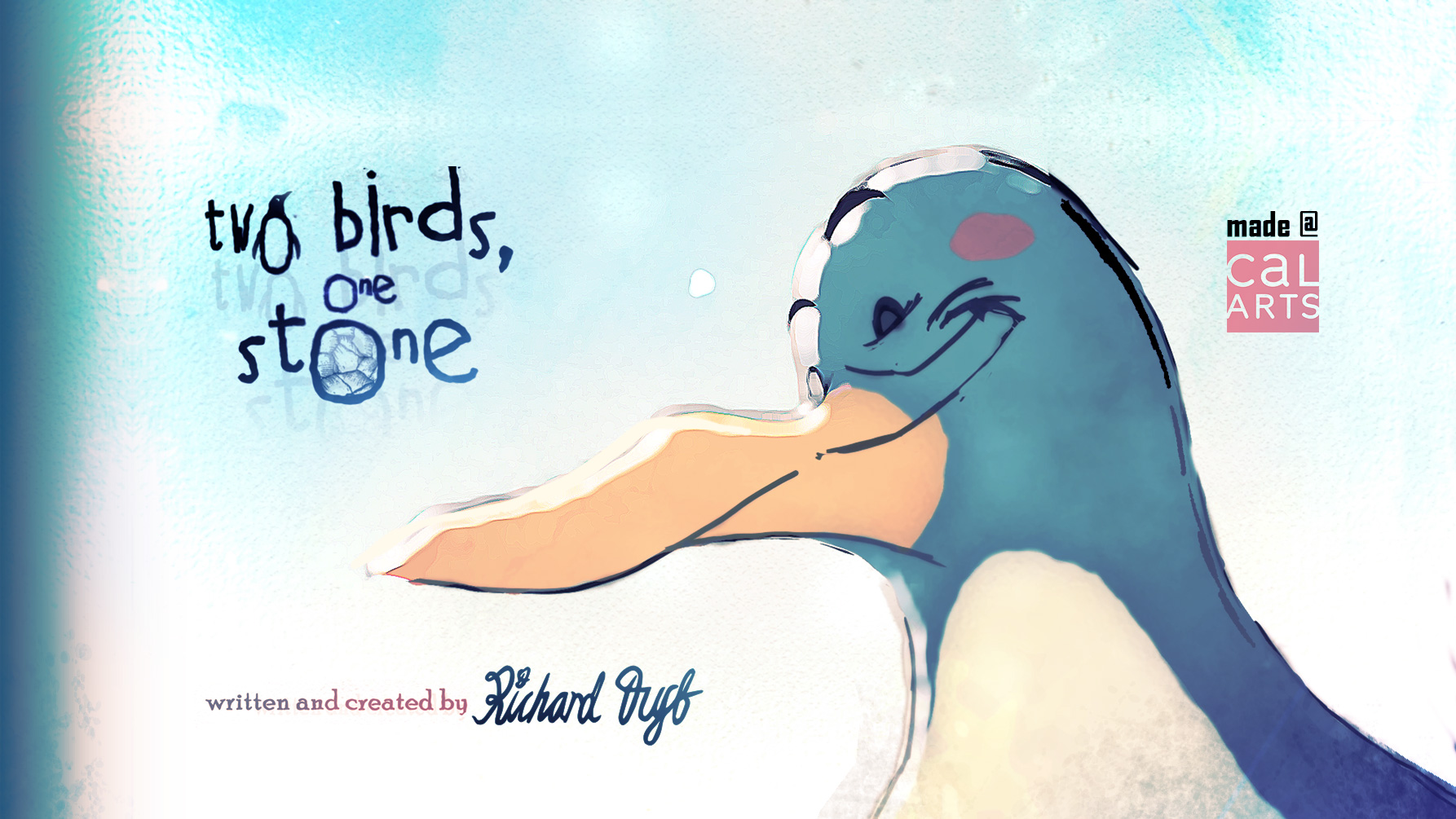 an animated short by Richard Tuft

I wrote, animated, designed and created it all during a 10-week long production schedule during my last semester in the Calarts’ Character Animation program.

We don’t get long really to work on our films (especially when you consider that we’re also doing classwork and assignments throughout the work week too). As we all know Animation is a time-consuming medium to make anything in. And 10-weeks will fly by in a flash. But, in a sort of “boot-camp” kind of way, it really makes you get down and dirty with what it takes to make a short film, and appreciate the process.

So, although the thing will inevitably be a lil’ rough around the edges, and I’ll probably not be able to bring myself to watch it this time next year through shame – it was nevertheless a rewarding process.

Anyhow, without further to do – (for what it is) here is my short animated film – Two Birds, One Stone. . .

This was just a start, my first foray if you will, into putting all the various forms of animation together to form a complete and central vision – from conception, design, writing and recording – right up thru to animation and all the bells and whistles you apply in post.

Unfortunatley, what with the extremely tight timeframe to make the film, in what amounted to about 10-weeks (which included writing, boarding, designing, animating, colouring and inking, recording and sound designing by myself – as per Calarts Character Animation tradition), and in-between graduation level studies during the week-days for my BFA degree – I had to significantly pull back on story elements I wanted to include for the film. Namely, the entire opening sequence which would better establish the colony, the set-up of how Penguins attract mates at mating season by showcasing their ‘nest building’ skills (and why they do it), and indeed the characters (crucially – Percy’s female penguin pal who appears near the end now some-what out of the blue!). There was a Chief and a Chieftess, a whole bit about how the male and female penguins prepare for the big day (and how they come together for it after being seperated, and what it means) – and dare I say, a good bit of fun had with the little world of theirs and how it works. Instead, I had to get my ‘producer’s hat’ on and brutally cut a whole swath of production time out in order to realistically get it done. An early lesson in the production life of scope and budget!

Alas – I’m sure, as I said above (and for many factors) I’ll look back on this ‘Two Birds, One Stone‘ a little hesitantly, and with a cringing eye of self-deprecation. If hopefully only for the fact that I keep on progressing and driving forward in a pursuit of making better and more compelling stories, and more creating interesting and engaging characters.

So, with that in mind – I hope you don’t judge this primordial offering too harshly. And as always, thank you for watching and supporting – a film without an audience is about as useful as a screen door on a submarine – so thanks for keeping the water out – and keep looking out for me next foray into the mad, mad world of animated toonin’! 🎬💦